Louis Vuitton, spring fashion collection 2012, this mood was embodied by the abundant use of eyelet lace forming fields of daisies. To soften the effect even more, these pieces were veiled in sugar-almond-colored organza layers or misted with shaded ostrich-feather fronds. Skirts were as puffed as Ladurée macarons, the bouffant silhouette starting either from an Empire line just below the bust or erupting at the hip like the party dresses of a 1920s china doll. verything candy-colored and much of it trimmed with big lacy collars or oversize white buttons. Broderie anglaise dresses came veiled in pastel shades of organza; laser-cut lace tops and skirts were sealed in silk cellophane—the suggestion being, perhaps, that the contents were too precious to be unwrapped. After an interlude of matte crocodile motorcycle jackets that fell short of edgy in their icy pastel colors, Jacobs affixed 3-D plastic paillettes to dresses with crystals and embellished tweed skirt suits with ombré feathers. Here Louis Vuitton spring women’s clothing for 2012 from fashion week ny ( New York). 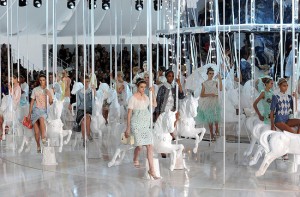 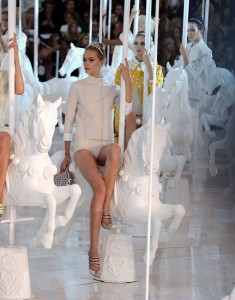