Carolina Herrera pre fall 2012 collection. Herrera showed a collection that ranged from warm-weather dresses for May, when the line hits stores to tweedy, fur-sleeved coats for cooler temperatures. The twisting and draping motifs from Carolina Herrera 2012 Spring show reappeared, but the autumnal palette of reds, browns, wheats, and cobalt blue was pure Fall. A few furry sleeves may be thrown into Carolina Herrera’s Pre-Fall 2012 collection, alongside the blue-tinged poodle prints inspired by her dog, Gaspar. But a large part of the offering is also diaphanous. What Pre-Fall means is Spring, Herrera explains, as these pieces will hit stores in May. This collection is a continuation of that. Women buy these clothes to wear in summer.

As for pieces that feel particularly in tune with Herrera’s personal style, look no further than the walnut-hued ball-skirt and black-and-white lace-inset blouse. The finest pieces were often the simplest, like a Deco-ish shift whose pattern appeared to be print but was actually a fine layering of tulle and lace. Whoever else Carolina Herrera may be channeling, Herrera has long been her own best influence. Carolina Herrera showed a trompe l’oeil one-piece look of lace-inset white top and billowing organza skirt, an evening ready nod to her own famous uniform. Carolina Herrera pre-fall collection. Carolina Herrera runway 2012 pictures: 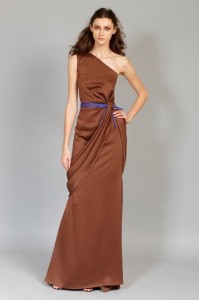